The NHS and social care

Funding the National Health Service is the biggest single thing the government does, so it is not surprising that it should be at the forefront of the election campaign. Health spending accounts for 7.2% of national income, up from less than 3% in the 1950s. Its share of government spending has risen dramatically in recent years from 13.4% in 2000 to 16.2% in 2010 and 17.9% now. Even so, real-terms spending increases over the last decade have been much slower than the long run average (1.3% p.a. against 3.6% p.a.).

In June 2018, the government announced a five-year NHS funding settlement, promising an extra £20.5 billion (£34 billion in cash terms) for the English NHS by 2023−34, relative to 2018−19. This implies annual real funding growth for frontline services in England of 3.3% per year: slightly slower than the rate at which UK health spending has grown historically, but certainly at a faster rate than has been the case since 2010. It is notable that this sets spending this year at a similar level to that promised by the Labour Party in their 2017 manifesto and on a much more generous path going forwards, and at a much more generous level than pledged by the Conservatives in their 2017 manifesto – as shown by Figure 1. 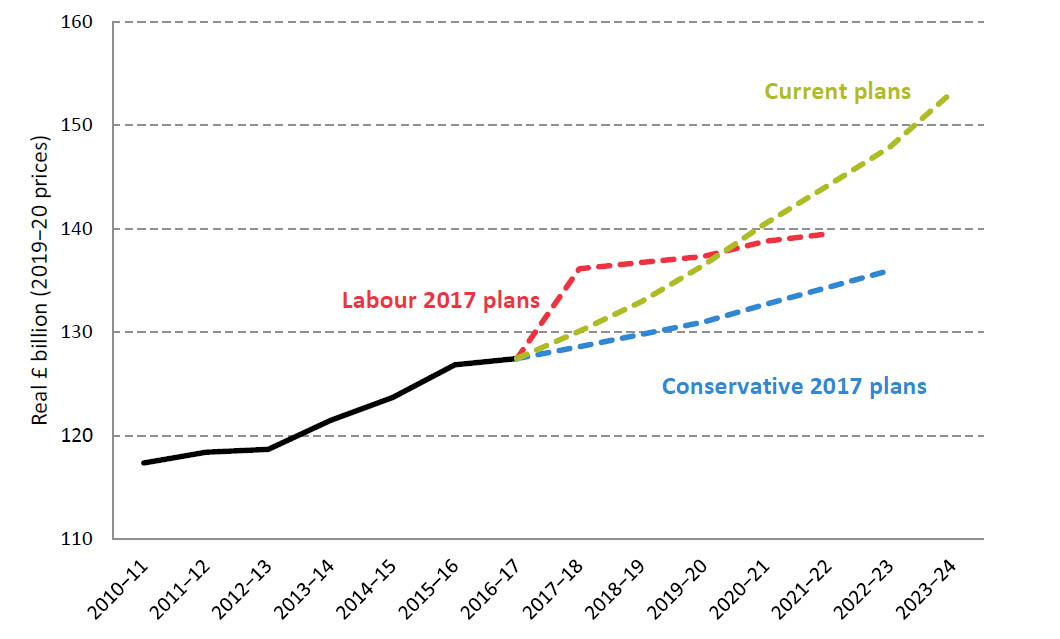 Notes and sources: Note: Figures refer to Department of Health and Social Care total departmental expenditure limits (TDEL). To project current plans beyond 2020−21, we have assumed that non-NHS England RDEL (which includes both non-NHS resource spending and DHSC capital DEL) is frozen in real terms between 2020−21 and 2023−24. From 2019−20 onwards, we strip out additional spending relating to the change in the discount rate used to calculate employer contributions to public service pension schemes. For more detail on the assumptions underlying Labour and Conservative 2017 plans, see R. Crawford and G. Stoye, ‘Challenging times ahead for the NHS regardless of who wins the election’, (cited below).

Social care was another key issue at the last election. In contrast to health care, social care spending was cut after 2010 – and while it is now on an upwards path, per-person spending is yet to return to 2010 levels. The system is widely recognised to be in dire need of reform, after multiple failed attempts over the past 20 years. Both Labour and the Liberal Democrats have promised reforms that would increase the generosity of the state’s social care offer, while Boris Johnson has promised “we will fix the crisis in social care once and for all, and with a clear plan we have prepared to give every older person the dignity and security they deserve”. Whoever wins the election, social care will be a pressing policy issue in the next parliament.

All of this creates huge challenges. Health and social care spending is almost certainly going to have to take a growing share of national income over time – another 0.7% of national income (equivalent to £15 billion in today’s terms) just by the end of the next five year parliament and another 3.3% (£70 billion in today’s terms) over the next 20 years. Figure 2 shows the long-run challenges associated with this spending. Accommodating this would require tax rises or spending cuts elsewhere just to meet demand. Promises for extra spending should be set against that sort of benchmark. Big numbers can sound impressive, but they have to be very big to allow for real increases in service quality. And that of course comes at a cost. 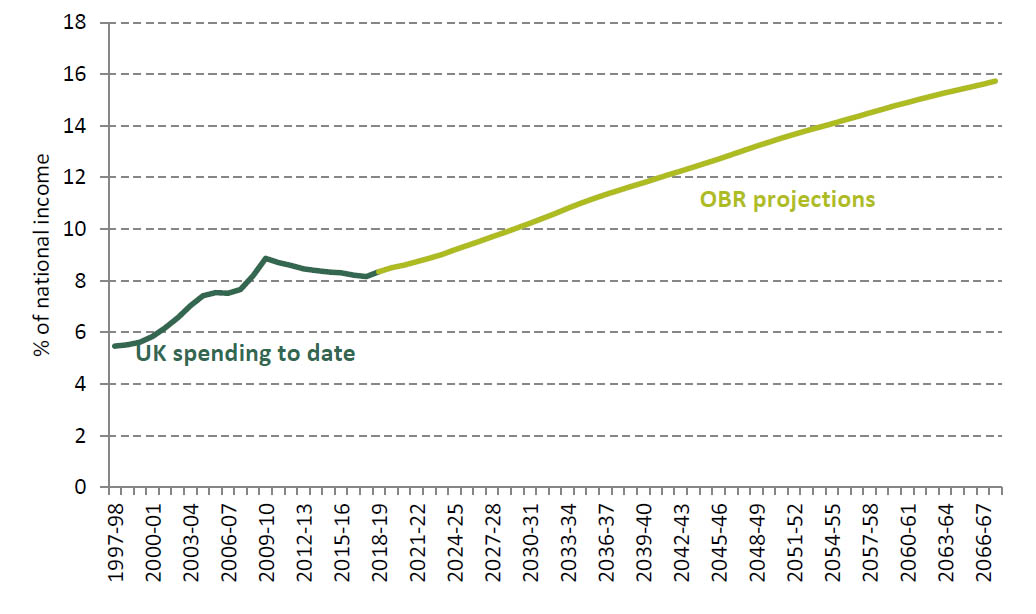 This briefing note sets out recent trends in the provision of NHS-funded hospital care by private providers – commonly referred to as independent sector providers (ISPs) – in England.

Labour’s NHS spending plans
The Labour party has today announced their commitments for NHS spending over the next four years if they were to win the 2019 general election. These plans imply day-to-day NHS spending in England that is more generous than current government plans.

Securing the future: funding health and social care to the 2030s

The outlook for councils’ funding: is austerity over?

This briefing note sets out recent trends in the provision of NHS-funded hospital care by private providers – commonly referred to as independent sector providers (ISPs) – in England.