The Labour party has today announced their commitments for NHS spending over the next four years if they were to win the 2019 general election. These plans imply day-to-day NHS spending in England that is more generous than current government plans. This announcement also covers all parts of the Department of Health and Social Care (DHSC) budget in England – including money for frontline day-to-day spending, other day-to-day spending and capital spending. We set out below the details of each of these in turn.

In June 2018, then-Prime Minister Theresa May announced a five-year funding settlement for the day-to-day NHS budget in England, promising an extra £20.8 billion of spending in 2023−24 relative to 2018−19, in today’s terms. This is equivalent to an increase of £34 billion in cash terms: the figure widely cited by Boris Johnson and Matt Hancock in recent interviews. Additional funding has also been allocated to the English NHS to compensate from 2019−20 onwards for higher than previously expected costs with respect to employer contributions to public service pension schemes. Taking this into account, the NHS England day-to-day budget is currently planned to rise to £140.3 billion by 2023−24 (in today’s prices), £23.5 billion higher in real terms than it was in 2018−19.

Importantly, the June 2018 funding settlement did not cover all government spending on health. First, it relates only to day-to-day spending on the English NHS – higher spending on the NHS in England does mean a corresponding increase in the grants allocated to Scotland, Wales and Northern Ireland as a result of the Barnett formula, but health spending in these parts of the UK is decided by the devolved administrations.

Second, non-NHS health budgets (such as public health initiatives, and education and training) and capital (investment) budgets were not covered. Firm budgets for these areas do not exist beyond next year (2020−21). This means we do not know what total DHSC spending will be after this. In the analysis that follows, we present a baseline for DHSC spending in future using the current government’s plans for day-to-day NHS spending in England combined with a real terms freeze in both non-NHS day-to-day budgets and capital budgets between 2020−21 and 2023−24. Actual spending in future could be higher (should, for example, the Conservatives announce a plan to increase capital budgets in real terms, rather than freeze them as we have assumed) or lower if these areas of spending are cut (as has been the case in recent years, with this portion of spending 11.9% lower in 2019–20 than in 2014–15).

How do Labour’s plans compare on day-to-day NHS spending in England?

Table 1 compares current plans with the Labour plans for day-to-day NHS spending in England. On the basis of existing government plans, the NHS England day-to-day budget is set to be £23.5 billion higher in real terms in 2023−24 than in 2018−19 (including additional funding for higher than expected pension contributions). This equates to real terms growth of 3.2% per year between this year (2019−20) and 2023−24 (the final year covered by the settlement). Under Labour’s plans, spending would increase by an additional £3.2 billion in real terms over that four-year period (£3.5 billion in cash terms), reaching £143.5 billion in 2023–24. This implies real growth of 3.8% per year. So spending in 2023-24 would be 2.3% higher under Labour’s plans than under those currently set out by the government. Of course, as we have seen since 2017, plans are apt to be topped up when pressures emerge. 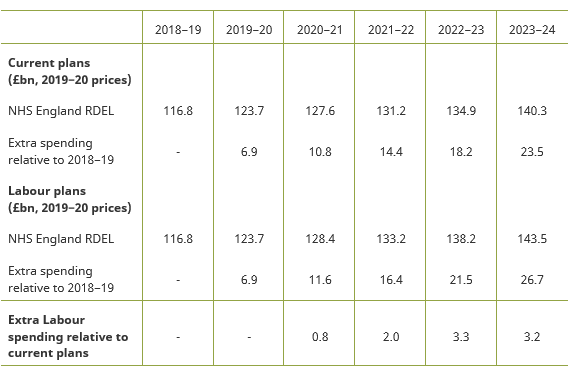 How do the plans compare for overall health spending in England?

Labour’s announcement also covers other components of the DHSC budget – including non-NHS day-to-day spending and capital investments. This allows us to examine how overall health spending plans would look under a Labour government, as shown in Table 2 and Figure 1.

Table 2 also shows how these spending plans compare to the baseline scenario for DHSC spending using current government spending plans on day-to-day NHS spending and assuming that non-NHS day-to-day and capital spending is frozen in real terms beyond 2020–21. Under this scenario, DHSC spending would grow at an average real growth rate of 2.9% between 2019–20 and 2023–24. As a result, total health spending in England would be £8.8 billion higher (in today’s terms) under Labour’s plans at the end of this period than under this baseline. This higher spending is comprised of an additional £1.9 billion for non-NHS day-to-day spending and additional capital spending of £3.7 billion by 2023–24, alongside the extra £3.2 billion for day-to-day spending in NHS England described above.

UK health spending has historically grown at an average real rate of 3.6% per year, but grew by just 1.3% per year between 2009−10 and 2018−19. Growth in total Department of Health and Social Care spending of 2.9% per year would therefore be at a slower rate than the long-run average, but at a faster rate than has been the case since 2010. Annual real growth of 4.3% per year, as under Labour’s new proposals, would be at a faster rate than the historical average, and puts health spending on a far more generous path than was implied by both parties’ 2017 general election manifestos (as shown by Figure 1). 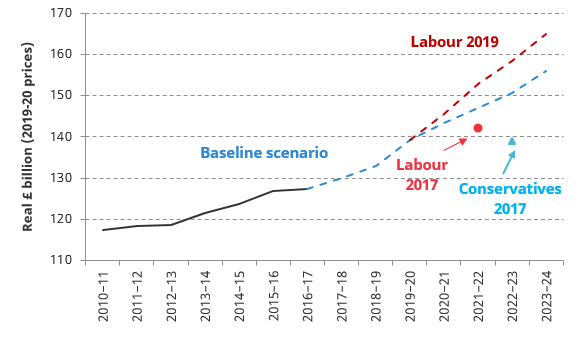 Note: Figures denote Departmental of Health and Social Care total DEL, and include additional funding for pensions costs. The baseline scenario assumes that non-NHS England resource DEL and DHSC capital DEL is frozen in real terms between 2020−21 and 2023−24. Labour 2017 and Conservative 2017 show the end-point of pledged spending using the 2017 manifestos and including equal additional funding for pension costs.