Brexit, the UK's trading position and implications for the UK public finances

The eventual form Brexit take will have significant implications for the UK's trading relationship with the EU, and the wider UK economy. The EU is the UK’s largest trading partner. It is both the most important destination for UK exports and its most important source of imports.

The importance of trade with the EU is shown in the Figure below which plots the value of UK imports and exports that were bought from and sold to the EU, the European Free Trade Association (EFTA) countries (Iceland, Liechtenstein, Norway and Switzerland), the US, China and the rest of the world as a percentage of the UK’s GDP in 2018. Nearly half – 45% – of all UK exports were sold to other EU member states. These had a value of £291 billion, equivalent to 14% of UK national income in that year. This is more than double the value of UK exports that were sold to the US, whose value accounted for 6% of national income. The relative importance of the EU as a source of imports to the UK is even greater. The UK’s imports from the EU amounted to £357 billion (equivalent to 17% of UK national income) in 2018, compared with just 4% from the US, which was again the second-most important area. 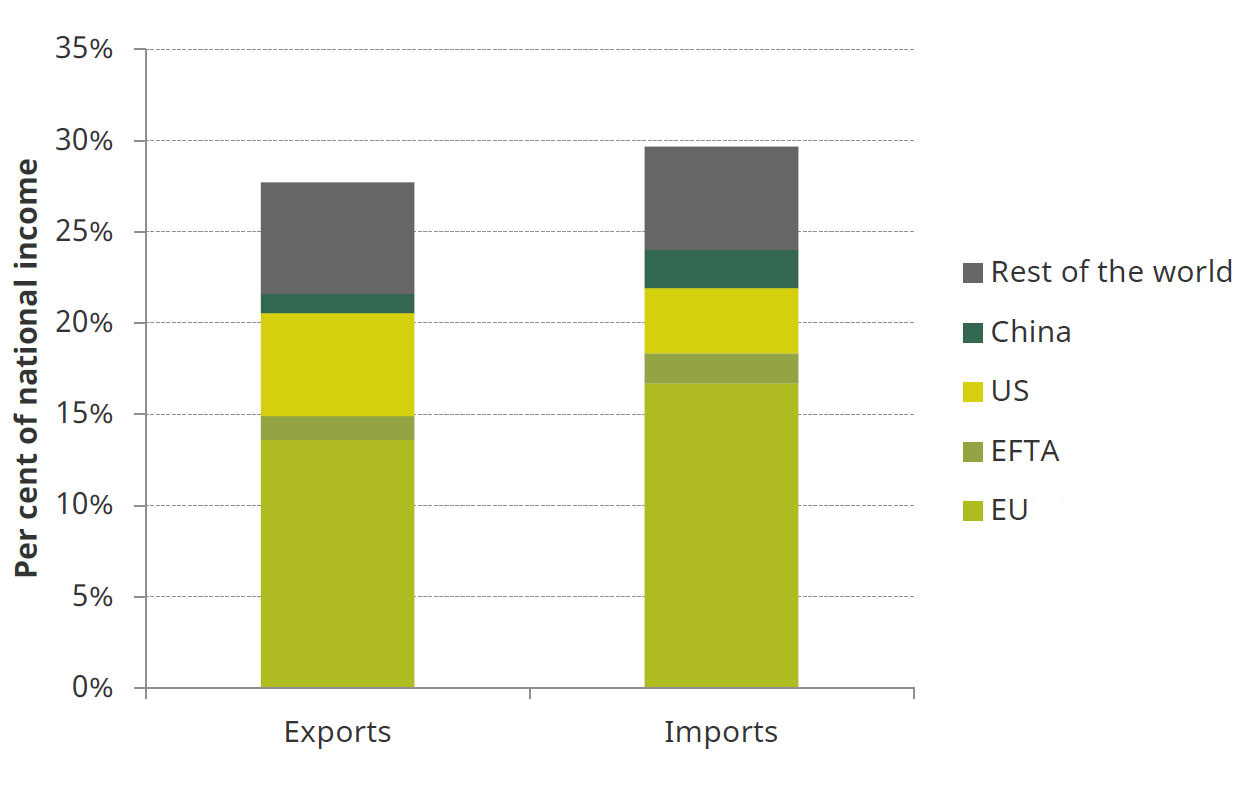 The sheer size of the trade flows passing between the UK and the EU means that any changes in costs applying to UK-EU trade are likely to have a large impact on the UK economy, labour market and public finances. The importance of these changes for the UK’s fiscal position is likely to far outweigh any direct benefits from reduced payments to the EU budget which amounted to £15.5bn (0.7% of GDP) in 2018-19. Moreover, the direct saving to the public purse will be smaller than this figure implies, as the UK government has pledged to replace EU spending in the UK, chiefly on agriculture and scientific research.

On top of these considerations a future government must decide whether and how the UK might pursue an independent trade policy after Brexit. This could involve new trade agreements with countries outside the EU or unilateral changes to protective measures the UK applies to imports such as tariffs, quotas and anti-dumping duties. Each of these decisions will involve important trade-offs between producer and consumer interests.