Below we outline an initial response from IFS researchers on the Liberal Democrat manifesto. We take a number of policy areas by turn but this is not a full assessment.

Further analysis will be published over the next week.

By far their most eye catching spending plan is a near quintupling in spending on universal free childcare – cementing an entirely new leg of the welfare state and offering a big boost to families with young children. We should though be cautious about expecting this to result in a big improvement in either child outcomes or a big increase in the number of parents in paid work. A £10 billion increase in the social security budget directed at working age families with more than two children, low earners and some disabled benefit recipients, also represents a substantial increase in spending. It would though still undo only a quarter of the discretionary cuts implemented since 2010.

Additional revenues would come from £37 billion worth of tax increases including increases in income tax and corporation tax rates, a reform to capital gains tax and a very big rise in air passenger duty. Nearly £6 billion is attributed to the dubious, if inevitable, “anti-avoidance” measures.

The biggest individual source of income for additional spending though would be the £14 billion 'remain bonus'. This is an estimate of the additional tax revenue (net of payments to the EU) accruing in 2024–25 as a result of the economy being, on their estimates, about 2% bigger than otherwise in the event of remaining in the EU. (The £50 billion bonus they focus on comes from cumulating additional revenues over five years.) Of course, there is a lot of uncertainty over such an estimate. That said if it were to become clear not only that we were going to remain but that that was a settled state for the long term, we could expect some additional growth and with it additional tax revenue. Their estimate is within the range of plausible estimates for the extent of that additional revenue.”

Stuart Adam, a Senior Research Economist at the IFS, said:

“The Liberal Democrats say they would raise £37 billion a year through tax increases.

A little under half of this comes from straightforward increases in the rates of income tax and corporation tax. The rest comes from a range of measures with less certain revenue implications. Some would be more welcome than others, but most of them complicate the tax system.”

Most of that remaining revenue comes from three proposals to raise around £5 billion each:

The party also proposes major reforms to the tax system which are not intended to raise additional revenue:

An extensive – and expensive – set of promises on the early years

Christine Farquharson, a Research Economist at IFS, said: "The Liberal Democrats promises on childcare spending are much the most striking spending plans in their manifesto. They would dramatically expand the scope of the welfare state at younger ages. On their own costing they would increase spending on universal free childcare almost by a factor of five. This would of course come as a considerable benefit to many families by lowering their childcare costs, but evidence suggests it is unlikely to be transformative either on numbers of mothers in paid work or in terms of benefits to children's development."

Tom Waters, a Research Economist at IFS said, “The Liberal Democrat manifesto promised substantial increases in some working age benefits. They would end the two child limit in Universal Credit and tax credits, make adjustments to UC to increase incentives to work, and reverse some elements of recent cuts to housing and disability benefits. This would come at a cost of around £10 billion a year – a substantial amount, but still only enough to reverse around a quarter of the discretionary cuts implemented since 2010.”

Jack Britton, a Senior Research Economist at IFS, said: "There is not much evidence to suggest replacing maintenance loans with maintenance grants would have much effect on participation in higher education. The £600 million cost might be more efficiently spent increasing total support for the poorest students rather than replacing loans with grants."

The Liberal Democrats have today announced a commitment to spend an extra £10.6 billion on schools in England in 2024–25 as compared with 2019–20. This would deliver a boost of £4.8 billion in real terms and a 11% increase on today by 2022–23. It compares with the £4.3 billion real-terms increase (10%) promised by the current government up to 2022–23. Both would effectively undo the 8% cuts to per pupil funding implemented since 2010, but would still mean more than a decade without spending growth up to 2022.

There are two significant differences with current government plans. First the Liberal Democrats would boost spending more quickly – by £4.6 billion next year against the government’s £2.6 billion. And they are promising an additional two years of increases through to 2024–25 taking the total cash (real terms) increase to £10.6 billion (£5.6 billion), delivering a total real-terms rise of 13% by 2024–25.

Their commitment to starting salaries of £30,000 for new teachers and salary rises for existing teachers largely match existing government plans.

Luke Sibieta, IFS Research Fellow, said “The Liberal Democrats have committed to a slightly larger increase in school funding over the next three years than existing government plans, but would get there much faster. This would provide an early boost, but wouldn't change the picture of a long-run squeeze on school resources, with no change in spending per pupil between 2009 and 2022”

“All three main parties are proposing increases to health spending. Today’s proposals from the Lib Dems would increase day-to-day NHS spending in England by an average of 3.7% per year between 2019–20 and 2023–24, very similar to the 3.8% proposed by Labour and a bit above the 3.2% set out by current government plans for this period. These increases are broadly in line with most estimates of the funding increases required to meet pressures on the health service – and hence enough to keep things on an even keel, rather than enough to allow for dramatic improvements in quality.

Liberal Democrat plans also include increased funding for other day-to-day health spending in England and for capital investment. Taking this into account, spending on the Department of Health and Social Care would increase on average by 3.8% per year between now and 2023–24. This is a bit below the 4.3% increase implied by Labour’s plans set out last week, which included more generous capital funding plans in the later years. However Lib Dem plans are frontloaded and therefore higher for the first two years of the period.”

Liberal Democrat health spending plans would see real growth of 3.8% per year, versus 4.3% per year under Labour’s plans 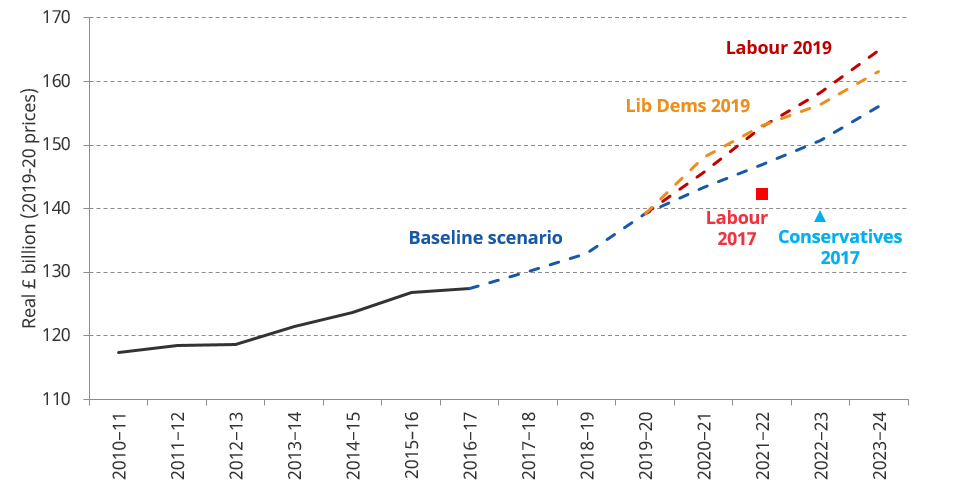 Note: Figures denote Department of Health and Social Care total DEL, and include additional funding for pension costs. The baseline scenario assumes that non-NHS England resource DEL and DHSC capital DEL is frozen in real terms between 2020−21 and 2023−24. Labour 2017 and Conservative 2017 show the end-point of pledged spending using the 2017 manifestos and including equal additional funding for pension costs.

“The Liberal Democrats have followed Labour and the Conservatives in promising a substantial and ambitious increase in spending on public investment. Their plans to spend an additional £130 billion over the next five years would see public investment rise to above 3% of national income: more than what the Conservatives are planning, but less than Labour. All parties would face considerable challenges in delivering investment on this sort of scale - whether that be the challenge of finding worthwhile projects in which to invest, or the challenges posed by shortages of suitably skilled workers in the construction industry.” 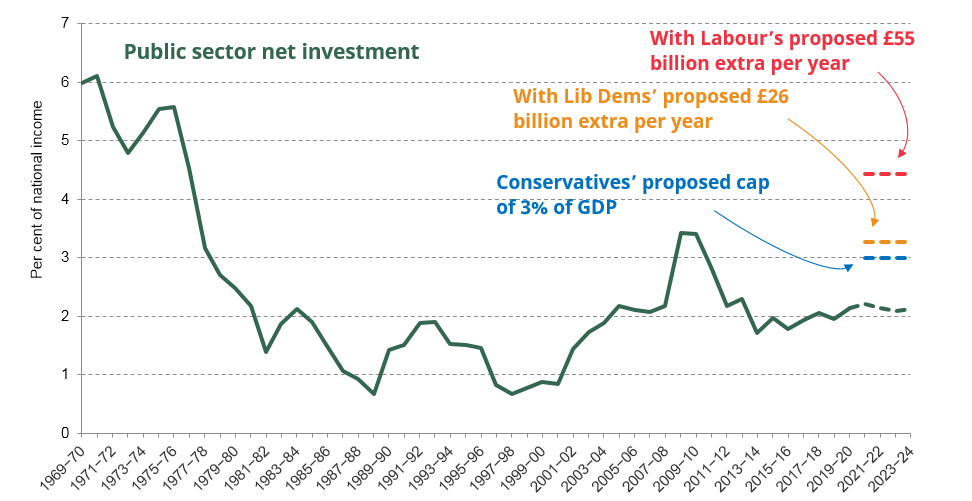 Note: Forecasts of PSNI as a share of national income under Labour and Lib Dem plans take account of the impact on real output using multipliers from the Office for Budget Responsibility. Dashed green line indicates current forecasts. Calculations assume funding increases are smoothed so as to achieve PSNI constant as a share of national income over the course of the parliament.