Below we outline an initial response from IFS researchers on the Labour manifesto. We take policy areas by turn but this is not a full assessment.

Further analysis, including costings and a comparison with other manifestos, will be published over the next week.

“The Labour Party manifesto offers a very substantial increase in the role of the state, one that is even larger than the big increase offered in their last manifesto. They estimate that their measures would push up day-to-day spending by £80 billion in 2023–24, which would be an almost 10% increase on what is currently planned. They estimate that their tax raising measures would bring in a similar sum, which if delivered would push the tax burden well above levels sustained in the UK since the Second World War. They also plan to increase investment spending by £55 billion a year, a doubling on current levels and even more than the substantial increases proposed by the Liberal Democrats and the Conservatives.

It will be extremely hard simply to deliver anything like this scale of increase in capital spending, at least in the near-term, certainly in an efficient and cost effective way. If the intention really is to scrap Universal Credit and replace it with an entirely new benefit system then, as the last decade has shown, this would come with the risk of huge administrative complexity and costs. A particularly expensive commitment is on the state pension age. Rather than allowing it to rise as longevity increases, Labour wants to keep it at age 66, a very expensive pledge in the face of demographic change. This would add a projected £24 billion a year to spending by the 2050s. The commitment to abolish university tuition fees remains an expensive giveaway to the highest earning graduates and has the potential to make it difficult to maintain a system without a cap on student numbers.

On the tax side the proposals in the Labour manifesto represent an enormous increase in the amounts they want to raise from corporation tax. If their proposals did raise the sums they suggest then we would be raising more in corporation tax, as a fraction of national income, than any other country in the G7, and more than almost anywhere else in the OECD. This would clearly come with substantial risks. The truth is of course that in the end corporation tax is paid by workers, customers or shareholders so would affect many in the population. In the end, it is unlikely that one could raise the sums suggested by Labour from the tax policies they set out. If you want to transform the scale and scope of the state then you need to be clear that the tax increases required to do that will need to be widely shared rather than pretending that everything can be paid for by companies and the rich.”

Stuart Adam, a senior research economist at the Institute for Fiscal Studies, said: “Labour claims its measures would raise £80 billion in 2023–24, with most of this coming from increasing taxes on companies and their shareholders. This would imply the UK raising more in corporation tax than any other G7 country. The biggest tax rise is an increase in corporation tax rates, which is unlikely to bring in as much revenue as Labour hopes, at least in the longer term. Increases in corporation tax would affect far more than the very rich: much of the burden would ultimately be felt by employees and customers.” 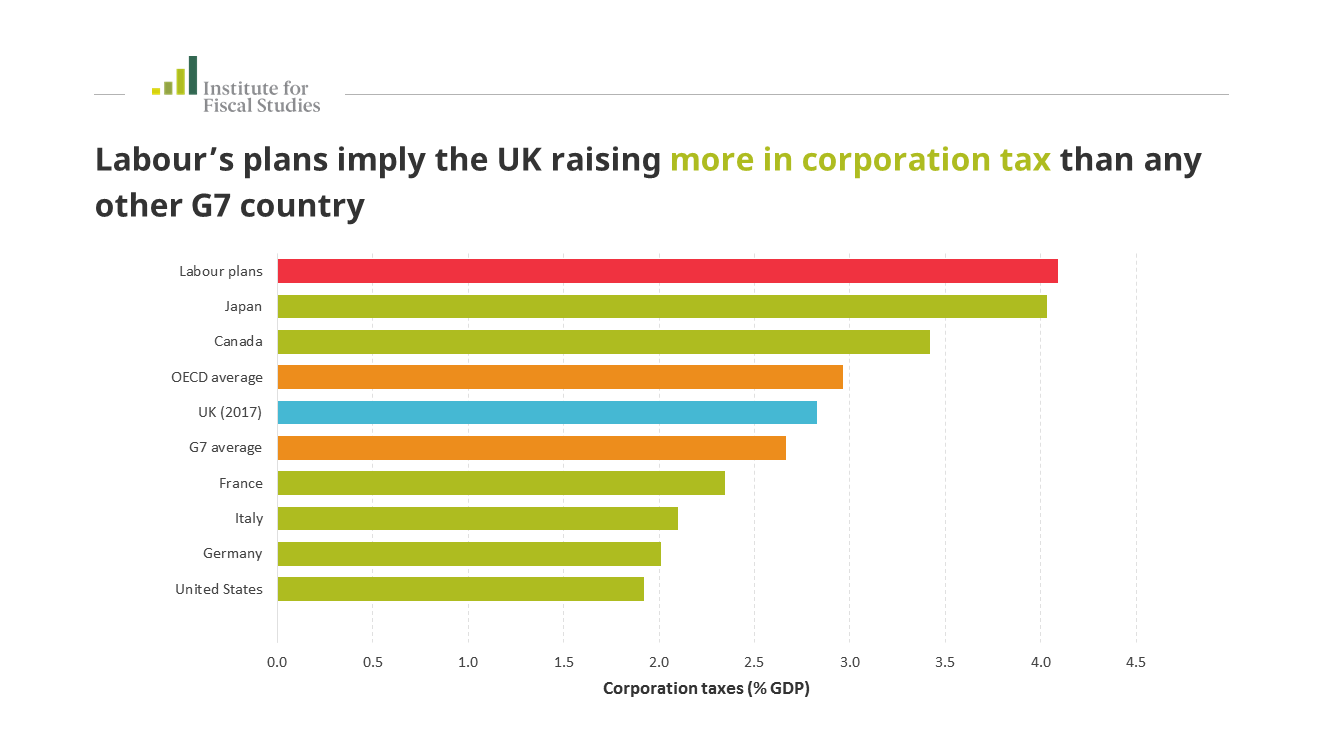 Ben Zaranko, a Research Economist at the IFS, said: “The Labour party manifesto includes plans for an £80 billion increase in day-to-day spending by 2023–24, along with an additional £55 billion of investment spending each year. The Liberal Democrats have promised something similar, albeit on a smaller scale: an extra £50 billion of day-to-day spending by 2024–25, with £26 billion per year of extra investment spending.

Both parties’ plans would mean a marked expansion in the size of the state and would represent a sharp break with the recent past. If we exclude the extraordinary period following the financial crisis, Labour's plans would take total government spending as a share of the economy to levels last seen in 1976–77 – and not previously sustained in the UK for any significant period of time.” 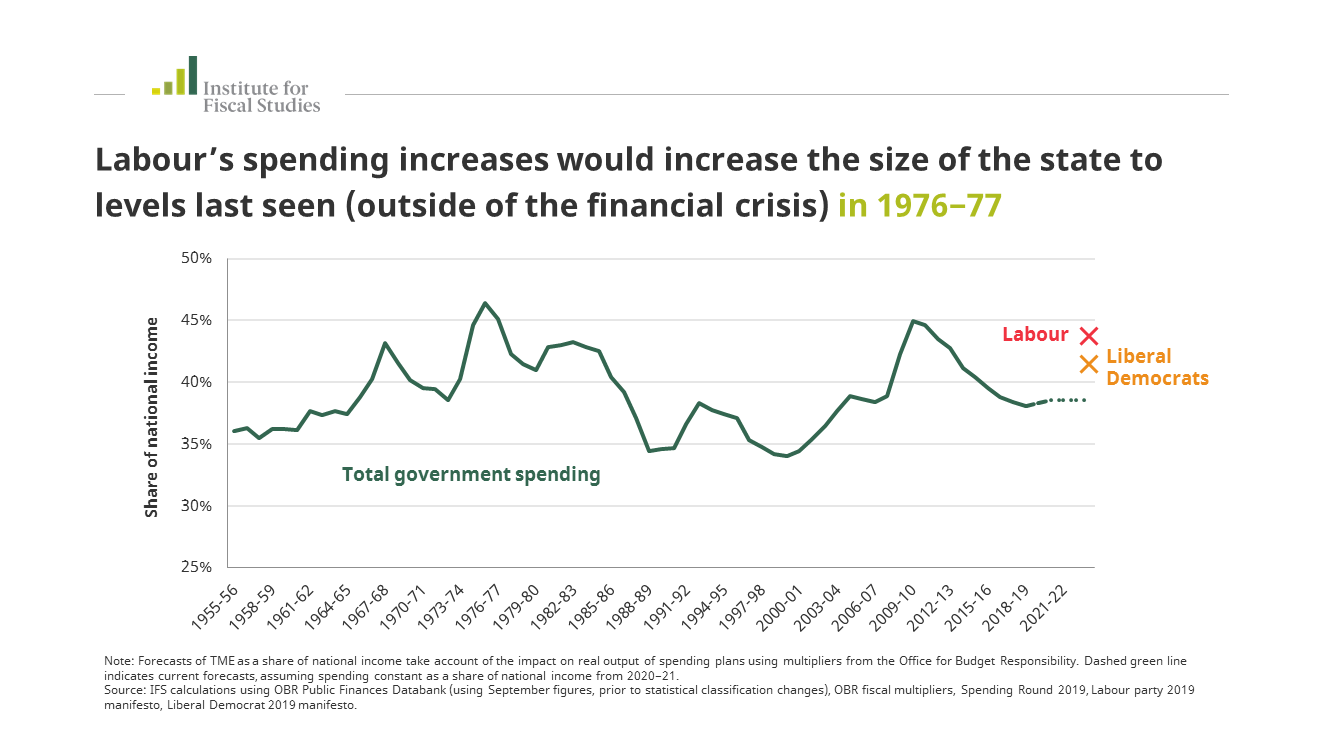 State pension age not increased beyond 66

Labour have said they would abandon the Conservatives' plans to raise the SPA, leaving it at 66.

“Keeping the state pension age at 66 would be costly, potentially adding around £24 billion per year to the cost of state pensions by the late 2050s. This would be on top of the dramatic, £38 billion per year, increase in spending on state pensions projected even with the planned increase in the SPA to 69. Increasing the SPA is a coherent response to increases in life expectancy at older ages and would keep the average share of life spent in receipt of a state pension constant. Concerns about those unable to work at older ages, or groups who have shorter life expectancies, would be better addressed through more targeted policies.” 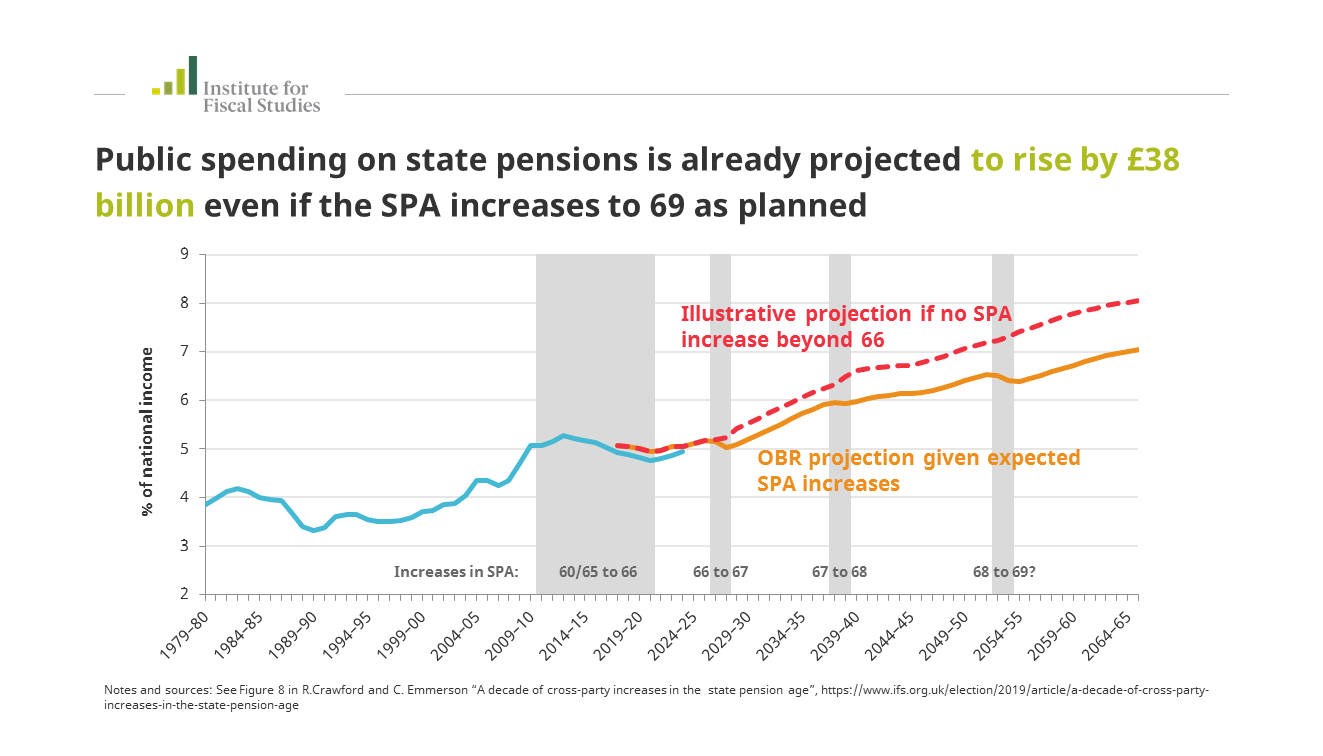 “The Labour manifesto promises a number of benefits giveaways, most of which are small individually but which add up to a substantial amount. While quite a few of these pledges would benefit those out-of-work, there are no giveaways targeted specifically at low income working households; perhaps surprising given Labour’s target to abolish in-work poverty within 5 years.

The manifesto repeats an earlier promise to replace Universal Credit, though provides little detail on what the new system would look like. Assuming that the intention really is to replace UC with something fundamentally different – as opposed to, say, a rebranding exercise accompanied by small tweaks or a change to the amount spent on it – then this would effectively be a commitment to redesign the entire working-age means-tested benefit system for the second time in a decade. The administrative complexity and risks of once again moving millions of families onto a new benefit could be as great as the challenges that UC has already thrown up.”

“The up-front cost to government of educating each cohort of 350,000 full time undergraduate students is currently around £17bn. Slightly more than half – about £9bn – of this cost is borne by students through the loans they will repay and the rest by the taxpayer, largely as a result of loans that will not be repaid. Labour’s plans will largely benefit students with the highest earnings and those wealthy enough to pay their fees upfront. If student numbers stay constant, they will cost the taxpayer £7bn per year. But it is plausible that student numbers would increase, and hence student number caps may have to be re-introduced to avoid costs rising in an uncontrolled fashion.”

“Coming on the tail of yesterday’s childcare spending announcement by the Liberal Democrats, Labour’s plans for an extra £2.6 billion (in today’s prices) of free childcare spending in 2024 might seem less ambitious than they really are. But the party’s proposals would still represent one of the biggest giveaways in the history of England’s free childcare programme, providing universal, funded, full-time childcare to all 2- to 4-year-olds. One big challenge for the party would be fulfilling its promise to recruit another 150,000 early years staff – a 40% increase on current numbers – while raising the level of qualifications in the workforce at the same time.” 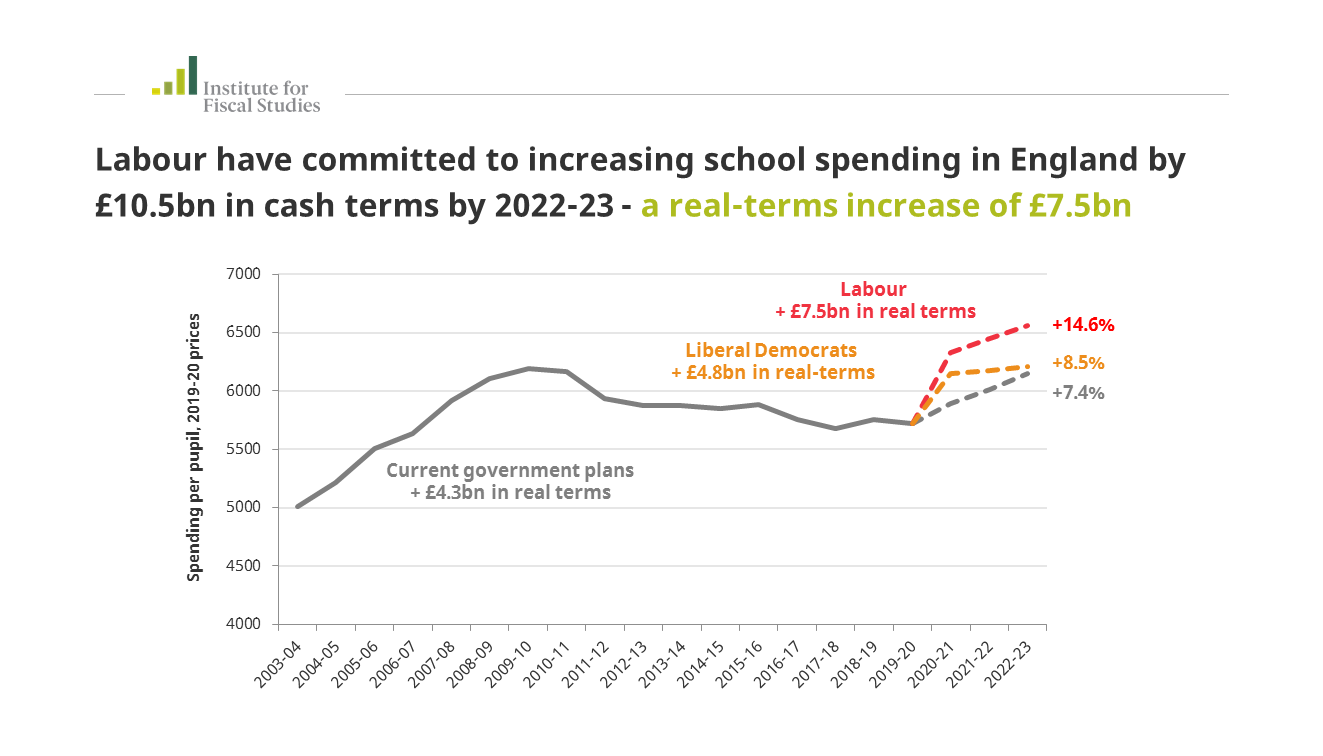 George Stoye, a Senior Research Economist at the IFS said:

“The three largest parties in England are all proposing increases to health spending. Today’s proposals from Labour would increase day-to-day NHS spending in England by an average of 3.8% per year between 2019–20 and 2023–24, ever so slightly more generous than the 3.7% proposed by the Liberal Democrats, and above the 3.2% set out by current government plans for this period. Of course, history teaches us that these plans are apt to be topped up, and should be seen as a lower bound for what will eventually be spent.

Both Labour and Liberal Democrat plans include extra money for other day-to-day health spending in England and for capital investment. Taking this into account alongside the additional funding for NHS England, overall spending on the Department of Health and Social Care would increase on average by 4.3% per year between now and 2023–24 under Labour’s plans. This compares to 3.8% under Liberal Democrat plans. Current government plans do not cover these wider components of health spending and therefore cannot be compared on a like-for-like basis.”

Ben Zaranko, a Research Economist at the IFS said:

"Labour’s manifesto includes a £600 million promise to scrap prescription charges in England. Broadly speaking, the old, the young, the poor, the disabled and the chronically sick are already exempt from charges: as a result 89% of prescriptions last year were provided free. The main beneficiaries of Labour’s policy to make the remaining 11% free of charge are therefore likely to be working-age people of reasonable financial means, and who are not chronically sick."

Polly Simpson, a Research Economist at the IFS said:

“As is well documented, there are widespread issues with the existing system of social care funding. Despite many suggested reforms that would deal with some of these issues – including free personal care and a cap of lifetime costs – none have been implemented as yet.

Labour have today set out their plans to address these key issues. In the short run they have promised additional funding for the existing system and the introduction of free personal care for those aged 65 and over. They have estimated that this would cost a combined £10.8 billion in 2023/14. This would be a very substantial increase in funding for adult social care, compared to current spending in England of around £18 billion per year.

In the longer term, they offer a £100,000 lifetime cap on all other care expenditures but do not provide details of what would be covered by the cap, or the additional funding required to cover the cost of the cap.”