Over the last decade, further education colleges and sixth forms have seen the largest cuts in education spending. Spending per student in 16-18 colleges (including further education and sixth form colleges) has fallen by over 12% in real-terms since 2010-11, with bigger cuts in school sixth forms (23%). Spending per learner in adult education has been broadly constant. However, rapid falls in learner numbers have accompanied large cuts in total spending. Since 2009-10, there has been a 50% real-terms cut in classroom-based adult education spending or a 37% cut if you include the effects of rising spending on apprenticeships.

What are the main parties’ spending proposals for young people in further education and sixth forms, and for adult education? To what extent will they reverse the cuts we’ve seen to date?

In the 2019 Spending Round, the current government announced a £300m increase in spending on further education colleges and sixth forms in 2020–21. This provides for at least a 4% real-terms rise in spending per student. There are also plans for further increases in subsequent years as part of plans to roll out new vocational qualifications called T-levels. This extra spending on T-levels will probably take longer to materialise due to a slower than expected roll out, but we assume existing plans are maintained as no new spending plans have been published.

Figure 1. Day-to-day spending per student in 16-18 colleges and school sixth forms under the Conservative and Labour parties’ plans 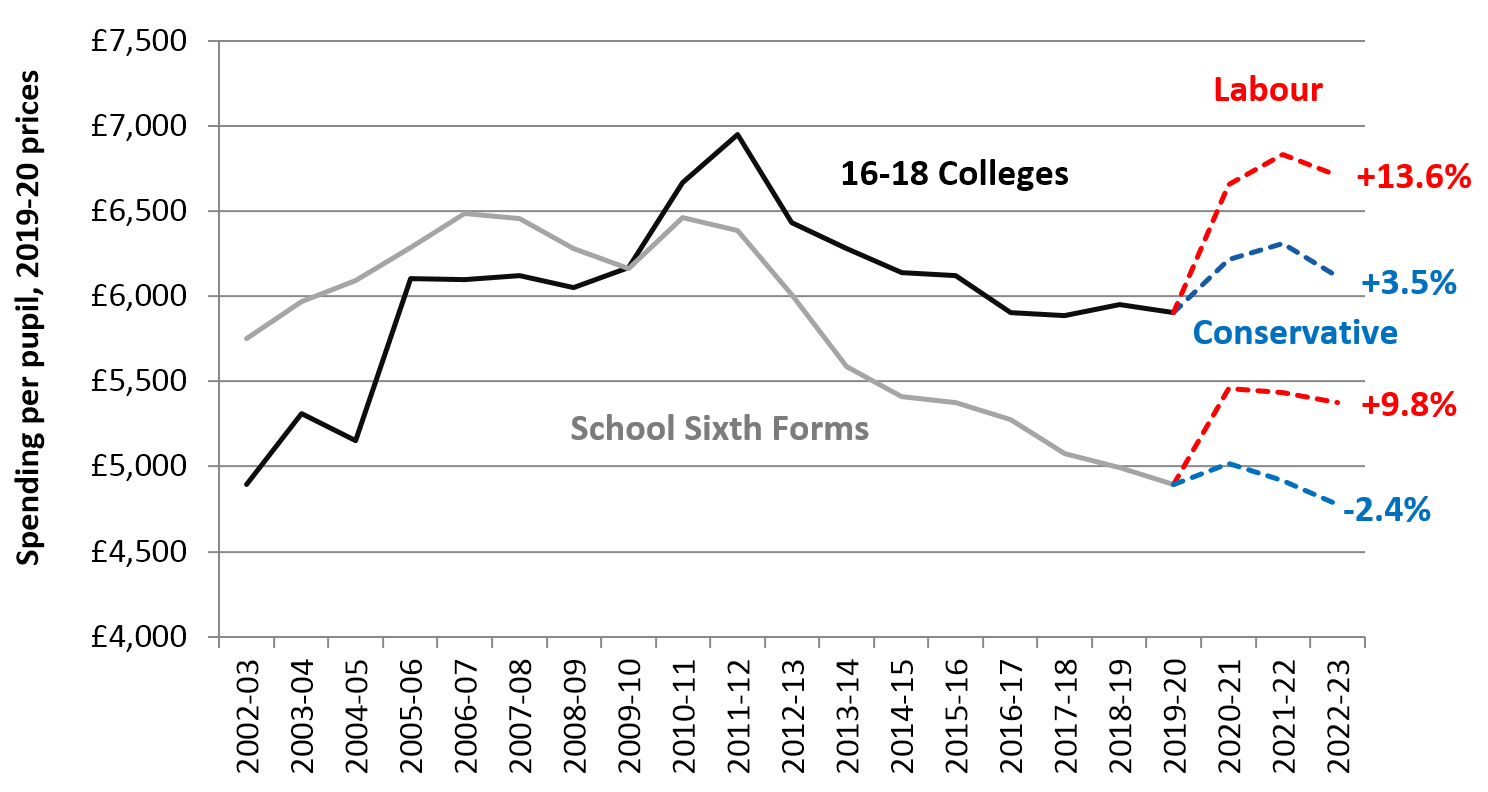 Notes and sources: Figures for spending per pupil in England up to 2019-20 are taken from IFS 2019 Annual Report on Education Spending in England 2019 (https://www.ifs.org.uk/publications/14369). Figures are then projected forwards based on Conservative proposals for extra £400m in cash-terms in 2020-21, a real-terms freeze in total spending and current government plans for T-level spending up to 2022-23. Labour proposals are projected on basis of aligning current 16-18 base rate in 2020-21 with that for Key Stage 4 and protecting in real-terms.

The Conservative Party also proposed additional capital spending of £1.8bn in cash-terms between 2021 and 2026 to upgrade the further education estate. They included about £800m towards this on the scorecard published in their manifesto. The funding for the rest would presumably be found through the additional borrowing, which their proposed fiscal rules would allow. It is also quite backloaded. About £600m of the £1.8bn would not be spent within the next parliament, coming in 2025 or 2026 instead.

The Labour Party has two main policies on 16-18 education. First, it would reintroduce the Education Maintenance Allowance for 16-18 year olds at an annual cost of around £750m. This would provide a grant for students from low-income families who stay in education after age 16. Second, Labour would provide an of increase of about £600 in spending per student by increasing the basic amount allocated to schools and colleges for 16-18 year olds so that this is the same as that for 14-16 year olds.

Assuming these are on top of existing government plans, this would provide for a more than 13% rise in spending per student in 16-18 colleges between 2019-20 and 2022-23, taking it back to its level in 2010. It would also provide a 10% rise in spending per student in school sixth forms, taking this back to its level in 2015. The slightly uneven picture over time is partly driven by existing government plans for the rollout of T-levels and because Labour have only committed to protect the basic amount per student in real-terms.

The Liberal Democrats have proposed to increase spending on further education by £1bn by 2024-25, introduce a young people’s premium and spend an extra £500m on youth services. However, under current plans, total spending on further education is already due to rise by around £800m in cash-terms or by around £1.2bn if we add the effect of T-level spending. If Liberal Democrat plans include these planned rises, then the path for spending per student would look very similar to that proposed by the Conservatives. If they are on top of these existing plans, then spending per student would rise by around 10% in real-terms between 2019-20 and 2022-23, a similar path to Labour proposals. Due to this uncertainty, we haven’t included the Liberal Democrats plans in the graph above.

Labour and the Liberal Democrats have both set out substantial increases in subsidies and spending on adult education. Labour would make every adult eligible for lifelong learning up to Level 3 (A-level equivalent) and 6 years of lifelong learning at Levels 4-6 (up to degree level). Excluding the cost of abolishing of tuition fees, the Labour Manifesto costs this and other adult education commitments at £3.3bn extra per year by 2023. This would be close to a 90% real-terms rise in total spending on adult education.

The Liberal Democrats have proposed “Skills Wallets” worth £10,000 that all adults could draw upon for lifelong learning and assume this would cost about £1.6bn extra per year in cash-terms by 2024-25, which would represent about a 35% real-terms rise in total spending on adult education.

Whilst Labour and the Liberal Democrats are both proposing big increases in spending and eligibility, these come with significant risk and uncertainty. First, it is hard to predict how many people would actually take up these new offers and there is a risk that spending could come significantly above or below what is expected. Second, there is a risk of fraud with new providers and courses popping up to take advantage of the large subsidies, but ultimately providing poor education. This is exactly what happened with a similar policy of Individual Learner Accounts in the early 2000s, which were scrapped within a year of their introduction due to widespread fraud. Both parties have proposed tight regulation, but the very sizeable subsidy will mean that fraud or poor value for money are both genuine risks.