General election 2019: What are the challenges for the UK's economy?

Brexit continues to dominate the headlines - but the UK economy faces many other important challenges.

Inequality in the housing market, poverty among working people and reducing greenhouse gas emissions are among them.

For any party hoping to win power on 12 December, these are serious issues.

Younger generations have seen the price of homes rise far more quickly than their salaries - the main reason for this change. This is particularly true in southern England. 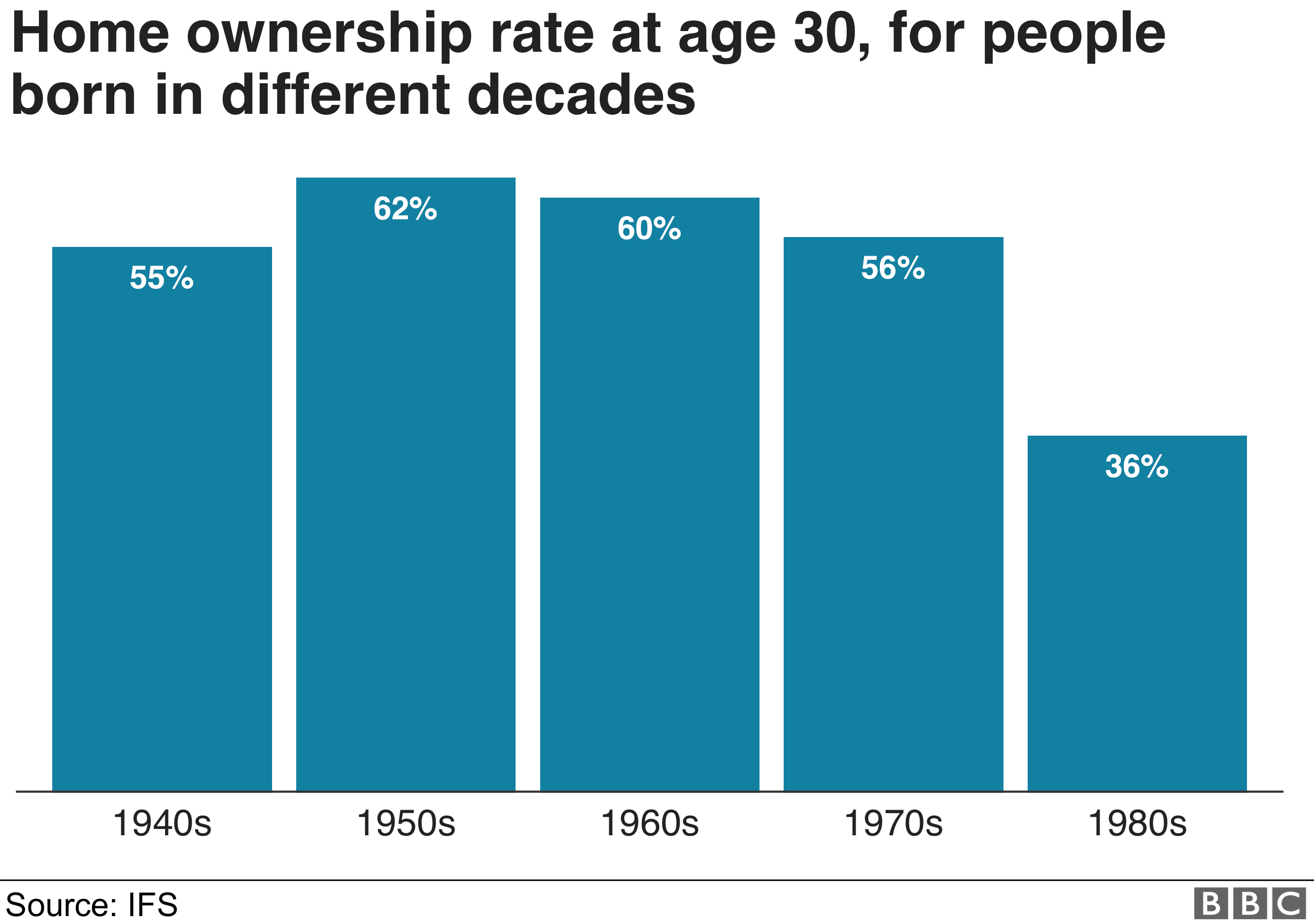 Many more people in their 20s and 30s are now renting privately. Their average housing costs are about 20% higher than 20 years ago.

Meanwhile, low interest rates mean most owner-occupiers - many of them older people - enjoy lower housing costs than in the past.

Growth in productivity - the amount the UK's workers produce per hour worked - has been unprecedentedly poor since the 2008 financial crisis.

In the past 11 years, the amount workers produce every hour has grown by just 2.9%. That's about as much as it grew on average every 15 months in the preceding 40 years.

As a result, productivity in the UK is now 19% lower than it would have been had the trend seen before 2008 continued. 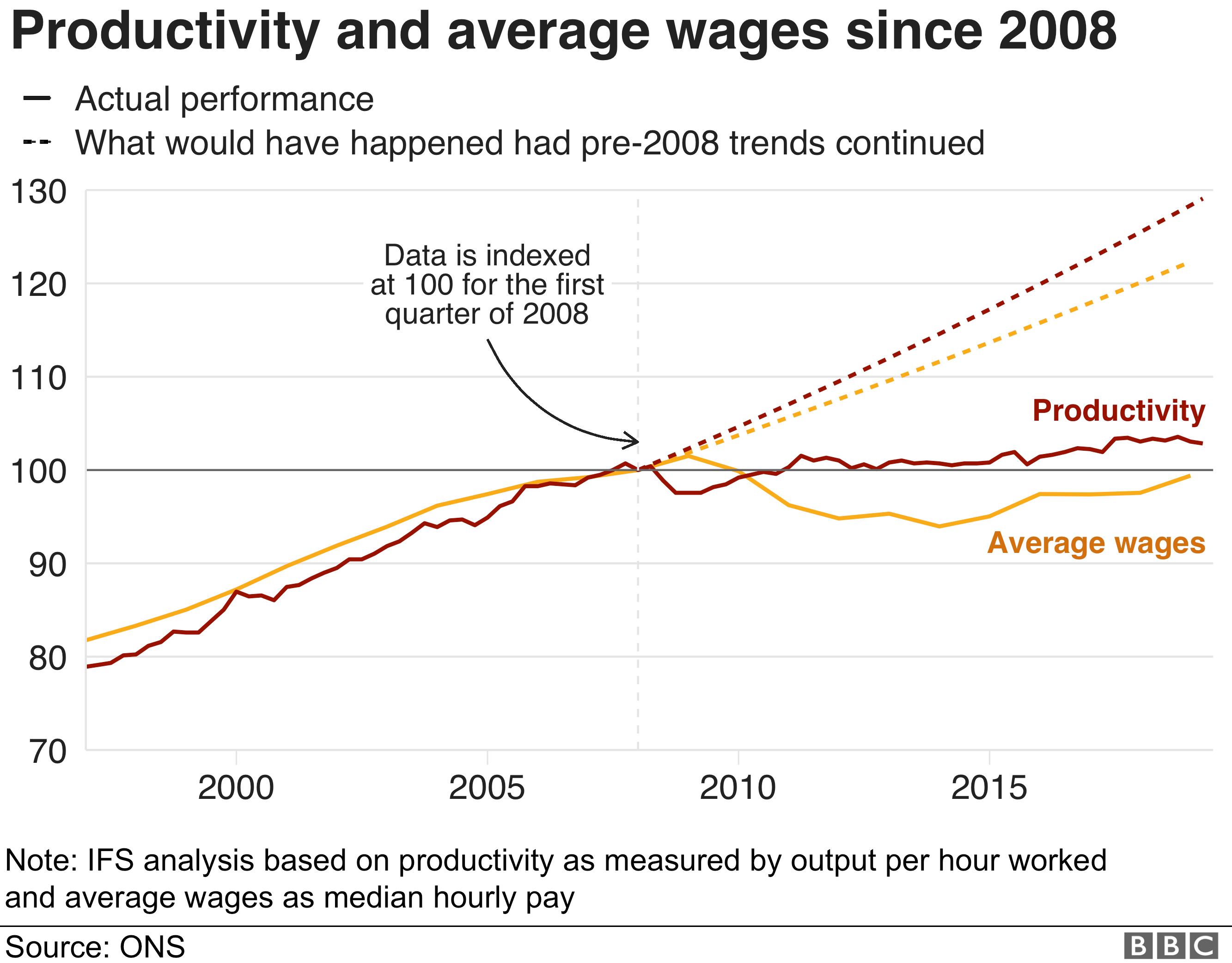 In the long-run, average living standards grow in line with growth in productivity.

Average hourly wages are roughly at the same level now as they were in 2008. Given they usually rise every year, this means they are also 19% below where they would have been had long-term trends continued.

A full-time worker on average hourly wages now earns £5,000 a year less than they would have done had the pre-2008 trend continued.

Poverty among people who are working

Low wages have had another knock-on effect - most people living in poverty in the UK are actually in working households.

In 2017-18, 58% of all those below the poverty line (less than £248 a week income for a couple with no children) were either in paid work or living in a household with someone who worked. This figure compares with 41% two decades ago. 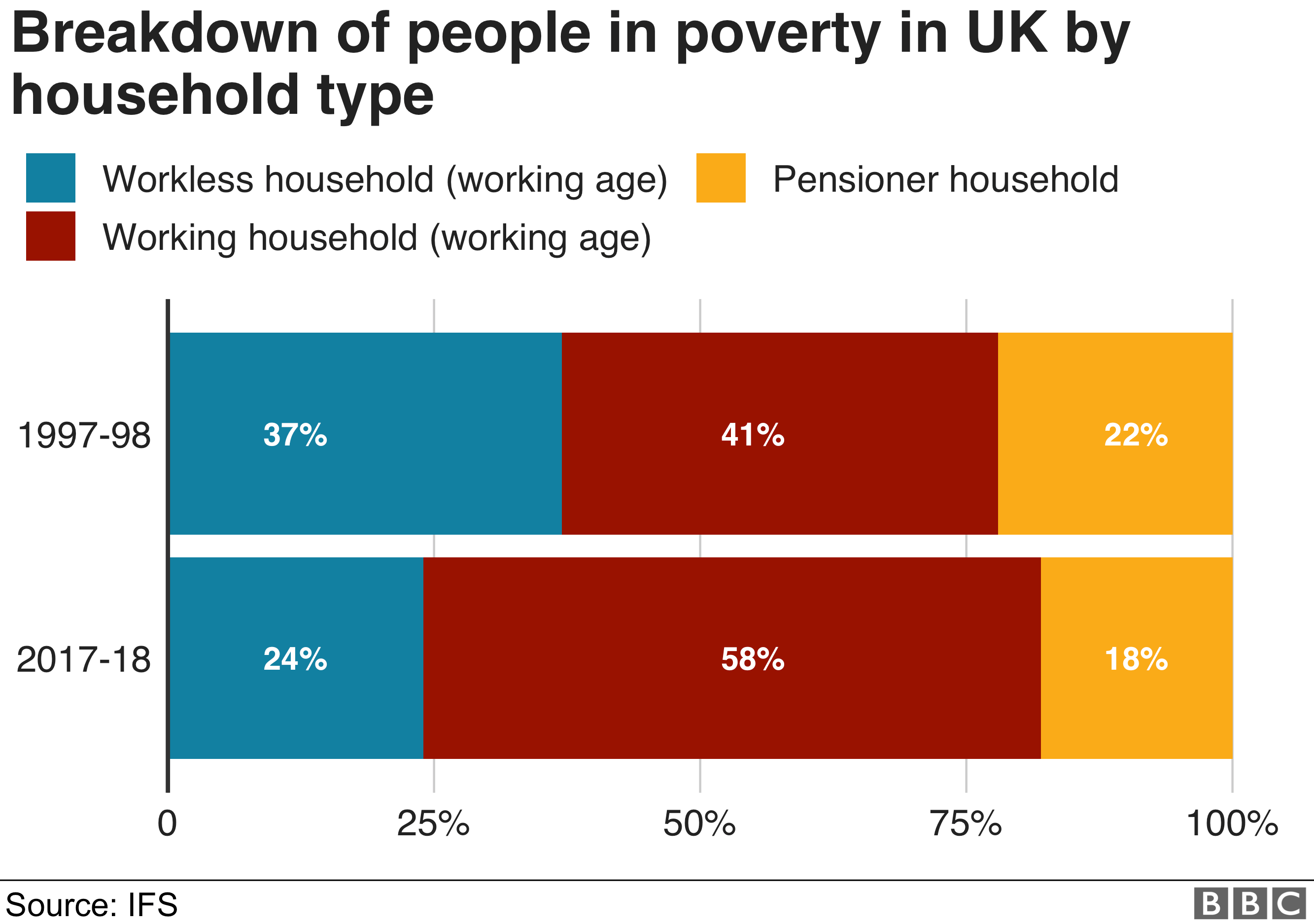 In part, this reflects positive trends. There are fewer households where nobody works, and pensioner incomes have increased.

But it also reflects the fact for low-income workers, wages are not growing as fast as housing costs.

An ageing population
As the UK's population ages, so does the amount of money the UK spends on pensions and healthcare. 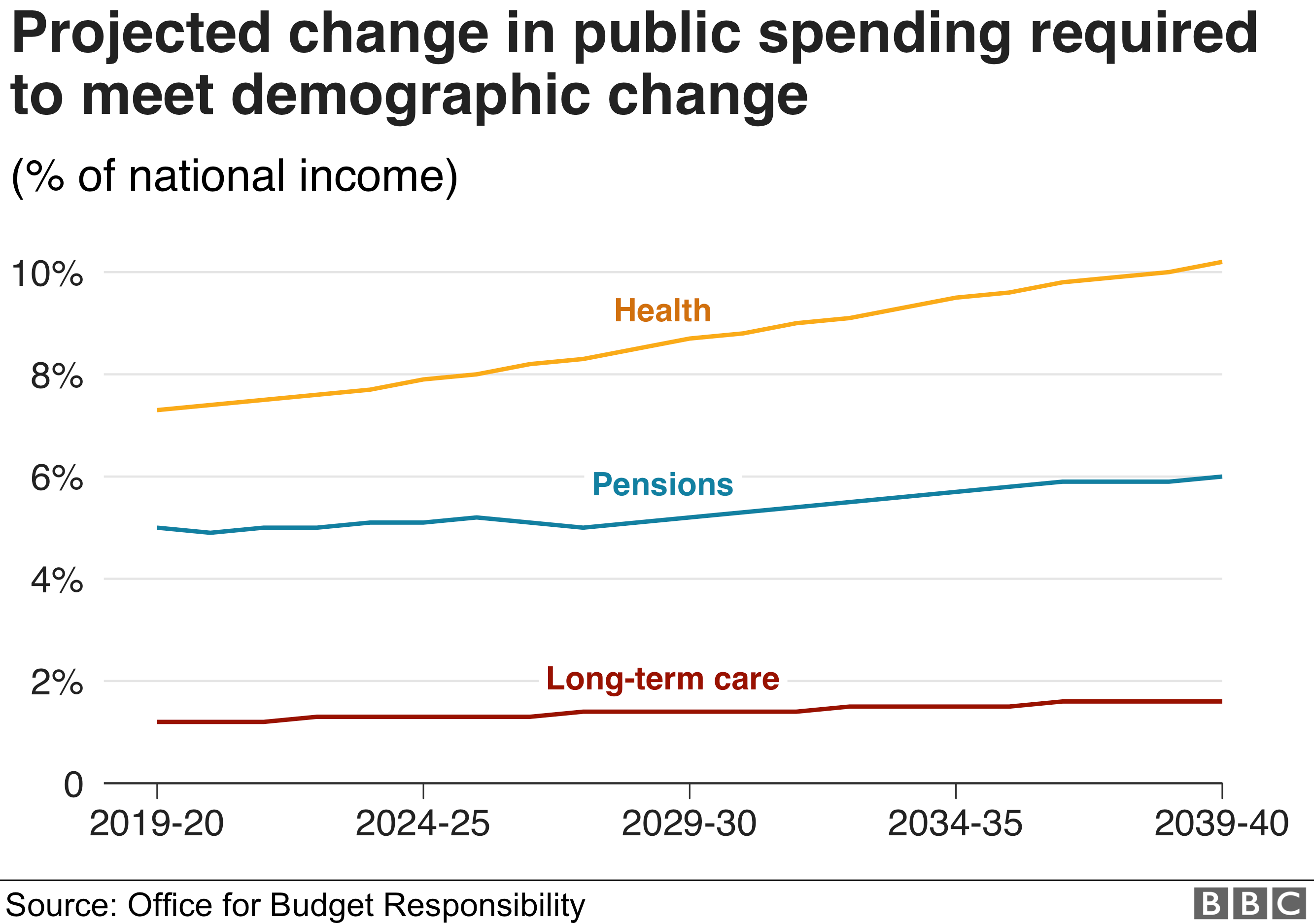 It's estimated this figure will have to increase by 1.7% of national income (£37bn in today's terms) over the next 10 years. This is just to keep pace with changes in the population and other cost pressures.

That will mean big tax rises, or spending cuts, just to keep things broadly as they are.

The UK government currently takes nearly 35p in tax from every £1 earned - the highest share it's taken since the 1940s.

Given the ageing population, and the various spending promises being made by the main parties, this is unlikely to go down any time soon.

Having said that, many European countries raise more in taxes. But they tend to raise more from people on average incomes. 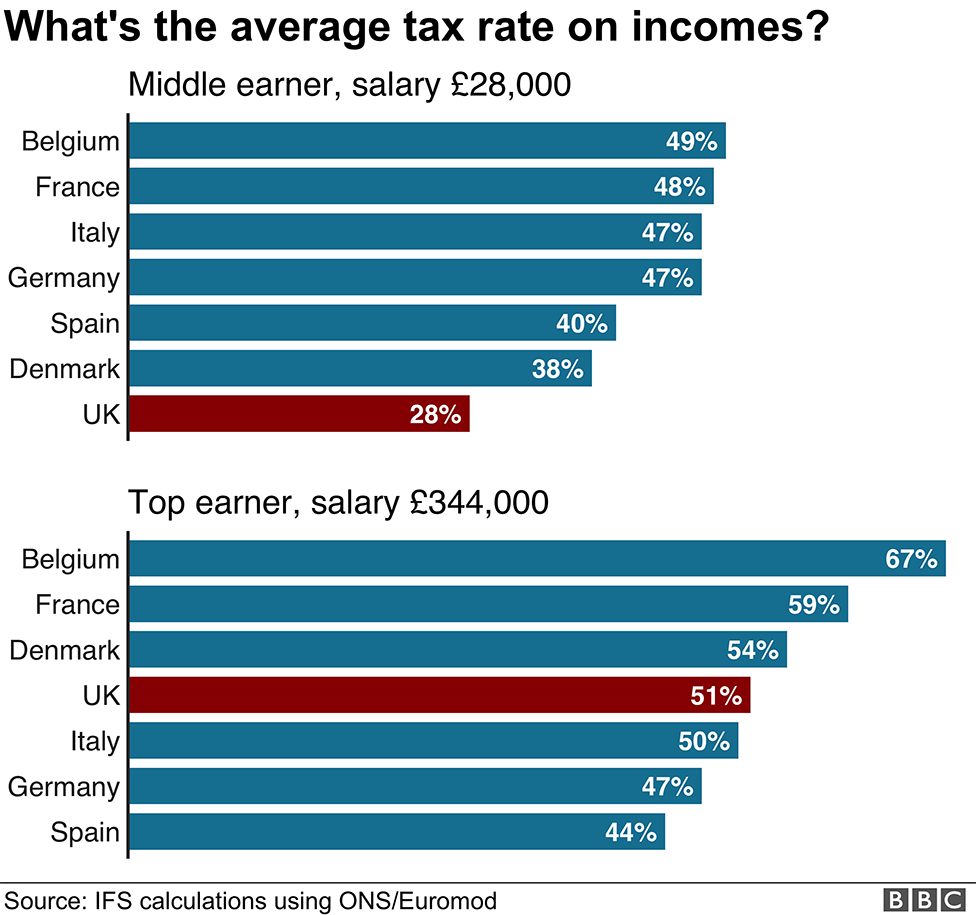 The UK, on the other hand, tends to rely on a small number of high earners for a lot of the tax it raises. The highest-income 1% of adults pay more than a third of all income tax.

The problem with this is that public finances are more vulnerable to changes in the income or behaviour of high earners. If a relatively small number leave the UK, this can have a outsized effect on taxes.

The amount of money raised is also under threat because tax levels on petrol and diesel have not been maintained. And it can be difficult to raise tax from multinational companies.

The main parties all say they want to reduce the UK's greenhouse gas emissions to net zero by 2050 at the latest.

While progress has been good so far (the UK's domestic emissions are 44% down on their 1990 level), the UK is still nowhere near meeting the target.

According to the Committee on Climate Change, radical changes are needed in the next few years. By 2025, it says, the UK should have a plan to completely replace gas as a source of domestic heating. By the early 2030s, all new cars and vans sold should be electric.

One of the economic challenges here is the less well-off spend more of their income on heating and transport costs. Any taxes targeting the carbon people produce need careful consideration to avoid making some worse off. 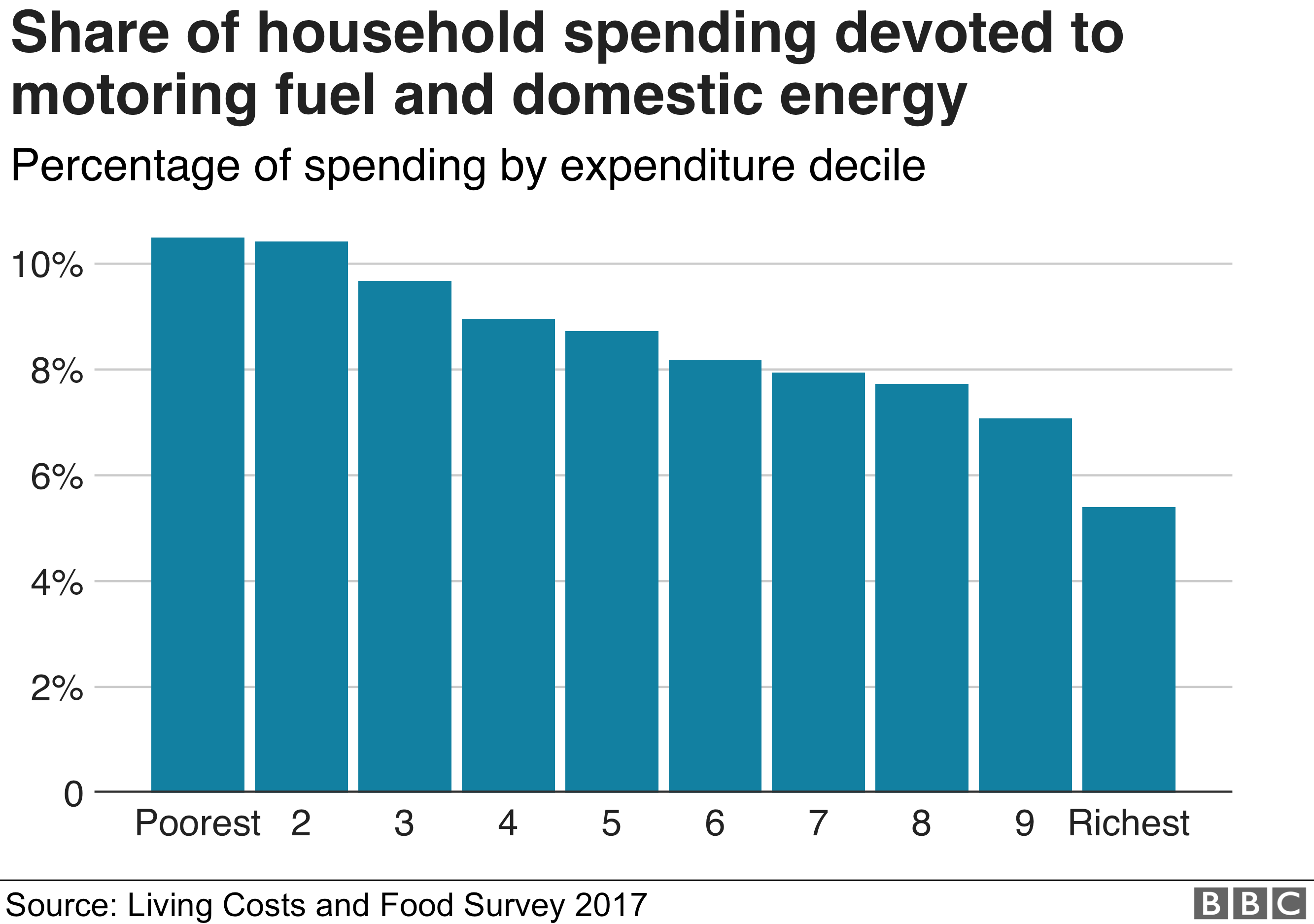 Paul Johnson is director of the Institute for Fiscal Studies. Follow him on @PJTheEconomist

This article was first published on BBC News and is reproduced here with permission.