Boris Johnson has announced that he would raise the threshold for paying National Insurance contributions (NICs) on earnings to £9,500 in the first Budget of a Conservative government. Currently 12% NICs is payable on earnings over £8,632 per year, set to rise with inflation to £8,788 in 2020–21.

Mr Johnson has also said he would raise the NICs threshold to £12,500, but has not specified by when he plans to do this. The NICs threshold normally rises with inflation, so without knowing the proposed timescale of the increase, we do not know how big an additional giveaway this would be.

This observation examines the effect of raising the NICs threshold to £9,500, assuming it is implemented in April 2020.

Raising the point at which employees and the self-employed pay NICs to £9,500 in 2020–21, instead of its currently planned level of £8,788, would take 0.4 million people out of paying NICs. Employees still paying NICs – those earning more than £9,500 – would each see their liability reduced by £85 a year. (Liability would be £104 lower than this year, but £19 of that reduction would have happened anyway because of the normal uprating of the threshold with inflation.)

The policy would cost £2 billion a year if only employee and self-employed NIC thresholds were raised, or £3 billion if the employer NICs threshold were raised in tandem.

The cost of going further and raising the threshold to £12,500 would depend on when it happened. Increasing the employee and self-employed threshold to £12,500 next year would cost £10 billion a year (or £16 billion if the employer threshold were raised too) and benefit most employees to the tune of £445 a year. Getting there by the end of a five-year parliament would cost less because of the effect of inflation, but the real annual cost would still be £8 billion (£12 billion including employer NICs). So even with a five-year timescale this would be a substantial and expensive giveaway.

Personal allowance and NICs threshold have diverged over time

NICs used to become payable at the same point as income tax (see Figure 1). But these thresholds have diverged over the last decade, as successive governments have substantially raised the personal allowance while neglecting the NICs threshold. 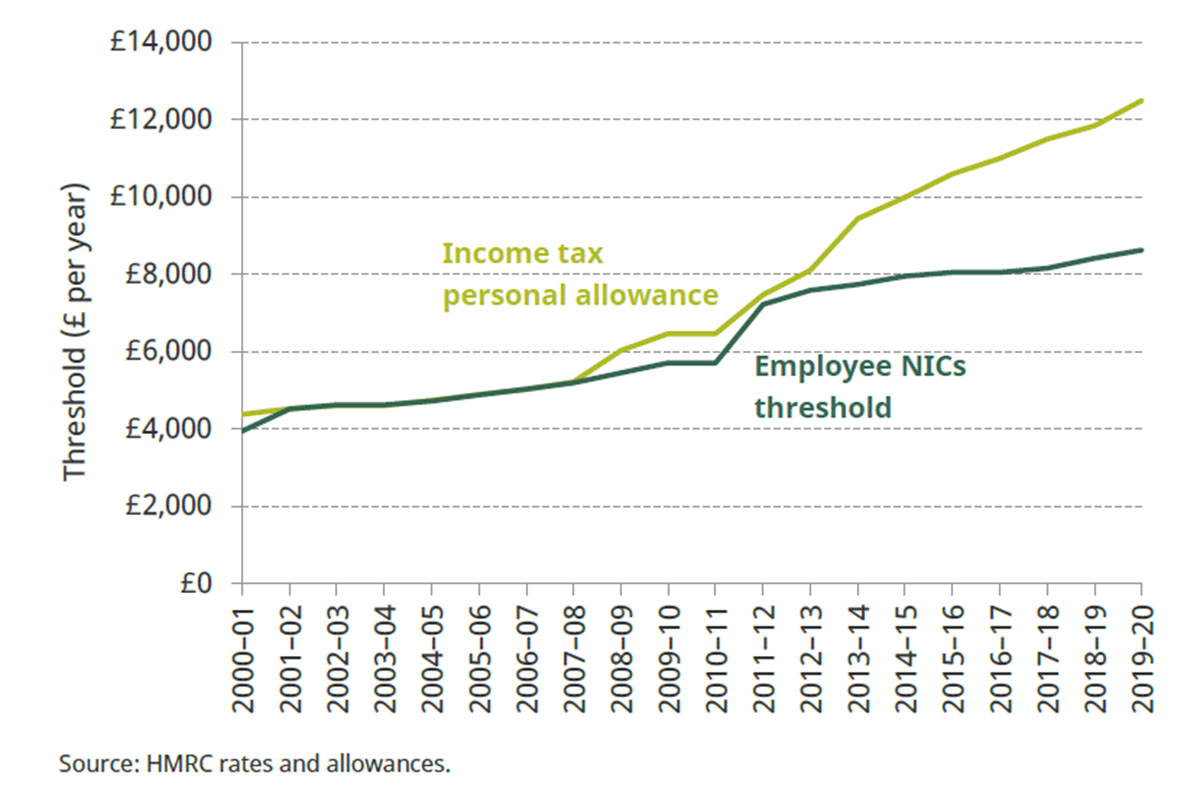 On average, the highest-income 30% of working households would gain around £150 a year from a rise in the employee and self-employed NICs thresholds to £9,500. The poorest 10% would gain only around £30 a year (see Figure 2).

1. Many of the poorest working households do not earn enough to pay NICs;

2. Households with two people in work tend to be further up the income distribution and would benefit twice over from the policy; and

3. Some benefits (in particular, housing benefit, council tax support and universal credit) are assessed on the basis of after-tax incomes, so many low-income households would see some of their gains from the NICs cut clawed back through reduced benefit entitlements. 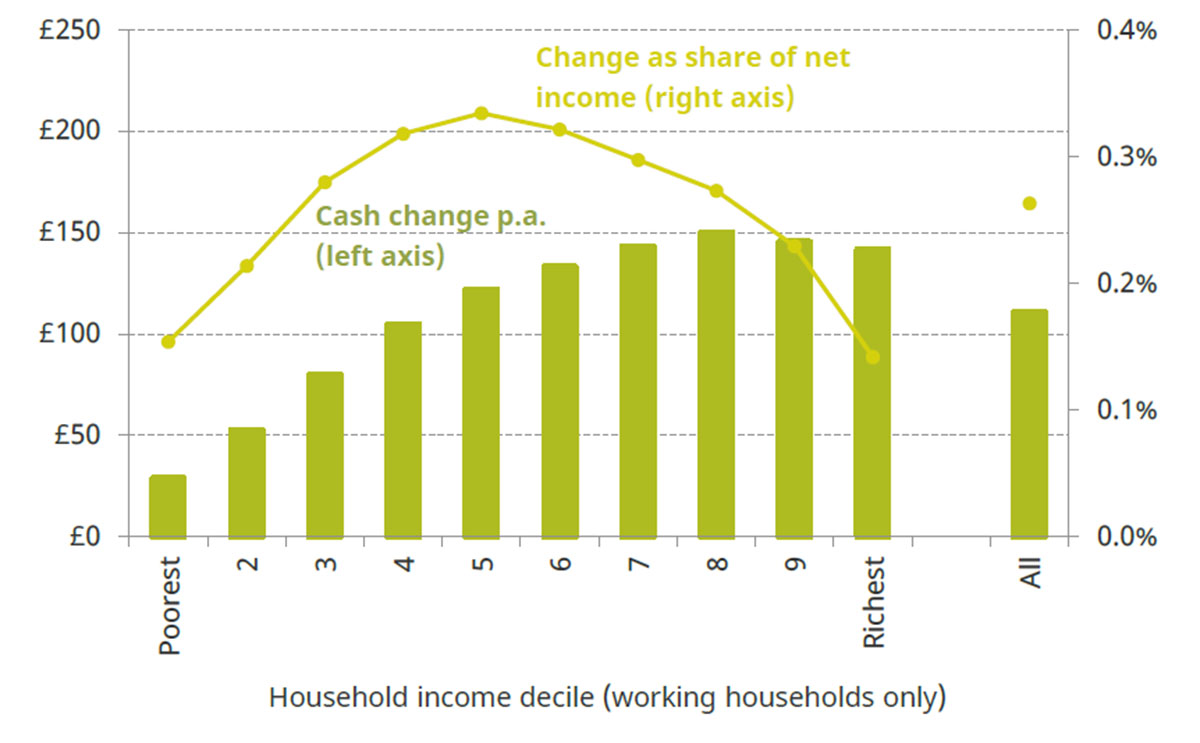 Note: Assumes full take-up of benefits and universal credit fully in place. Income deciles are derived by dividing all households into 10 equal-sized groups according to income adjusted for household size using the modified OECD equivalence scale.

Increasing work allowances in tax credits and universal credit would target low-income working households much better than raising the NICs threshold. But it would come at the cost of bringing more families onto means-tested benefits.

Xiaowei Xu, a Research Economist at IFS and an author of the research said:

“Successive governments have fixated on income tax at the expense of NICs, for example by raising the personal allowance while doing nothing to NICs thresholds. The attention to NICs is therefore both welcome and overdue. That said, if the intention is to help the lowest-paid, raising the NICs threshold is an extremely blunt instrument.

Only 3% of the total gains from raising NICs thresholds accrues to the poorest fifth of all households – and only 8% to the poorest fifth of working households. The government could target low-earning families much more effectively by raising in-work benefits, which would deliver far higher benefits to the lowest-paid for a fraction of the cost to government – but at the expense of expanding means-testing.”

Note: some figures were corrected on 26 November 2019