Colleges and sixth forms have faced large cuts in recent years. Between 2010–11 and 2018–19, spending per student aged 16 to 18 in further education and sixth form colleges fell by 12% in real terms, and by 23% in school sixth forms. Following on from larger cuts during the 1990s and lower growth than most other stages of education during the 2000s, college spending per student is due to be only about 13% greater in 2018–19 than it was almost 30 years earlier in 1989–90.

These are laudable aims. However, they are coming on a very tight timetable: T levels are due to be rolled out from 2020 onwards. Furthermore, ‘raising the prestige’ of vocational qualifications has been the goal of numerous governments over at least the last 30 years. In practice this has meant turbulence in the sector, with successive major reforms quickly superseded by another. For T levels – or any other reform to FE – to have a chance to succeed, they’ll require both sufficient funding and sufficient time to bed in.

Total spending on adult education (excluding apprenticeships) has fallen by nearly two-thirds since 2003–04. This combines cuts of 32% up to 2009–10 and of a further 47% between 2009–10 and 2018–19. These cuts have mainly been driven by falls in learner numbers, which have fallen from 4.4 million in 2004–05 to 1.5 million in 2017–18. This fall in learner numbers was mainly a deliberate attempt to reduce the number of adults taking relatively small and low-level qualifications. The recent Augar review of post-18 education has recommended reversing a range of the cuts to adult education.

Spending specifically targeted at apprenticeships rose by 36% in real terms between 2009–10 and 2018–19. This was partly driven by more apprenticeships amongst adults aged 19 or over. Despite this, the government still seems likely to miss its target for 3 million new apprenticeship starts between 2015 and 2020 by a wide margin. However, an increasing share of individuals on apprenticeships are now on A-level-equivalent courses or higher (over 60% to date in 2018–19 as compared with around 40% in 2011–12), which are generally more valuable in the labour market than lower-level apprenticeships. 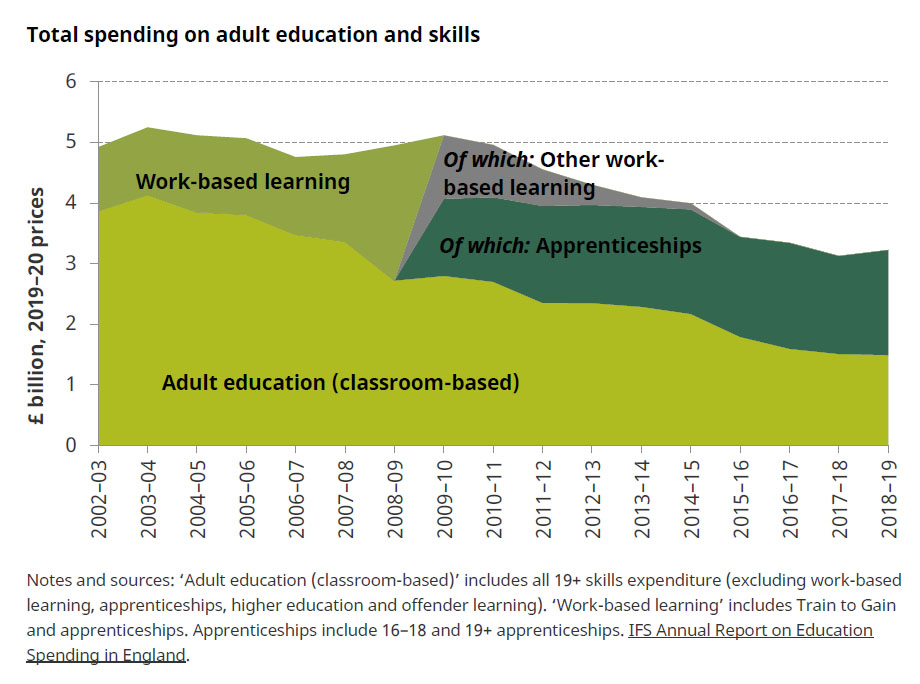 What are the main parties’ spending proposals for young people in further education and sixth forms, and for adult education? To what extent will they reverse the cuts we’ve seen to date?